At around 3pm on the afternoon of Sunday June 27th 2010, I crossed the finish line to complete what has to be my toughest physical challenge yet. Having been on my “list of things to do” for quite some time, I finally decided I was going to complete a marathon. January 1st, 2010, I began my training, initially with two compadres; both of whom unfortunately fell by the wayside as the months progressed.

I selected the inaugural North Devon Marathon as my target, I knew it would be a beautiful course and it runs through my favourite part of the country. This gave me plenty of time to train correctly, and allowed me to set up a midway check point consisting of the Bournemouth Half Marathon in Mid March.

I figured while I was doing it, I may as well raise some money for charity at the same time. I chose a charity that means a lot to me, The Alzheimer’s Research Trust.

I have to say, the beginning was the hardest part of the training. Weather aside (we’ll come back to that) it was a while before I could run for 30 minutes comfortably. My pace has always been a bit quick - that’s just my impatient nature - but really until I got upto distances of around 5 miles I was struggling. Once I hit that marker though, there wasn’t really much difference fitness wise until I was reaching the top end of my training. It then becomes a very difficult mental game.

Come the end of January and the snow arrived! What freak weather, jogging around the lake with Bananamatt and Sarge was a real challenge, 10 metres in and your feet are absolutely soaked from the slush!

I began to have a few problems with my lower left leg burning up, I don’t know what was happening, but the front muscle turned to rock and it felt like my foot was on fire. Some swanky new footwear did help for a few months though. Just before approching the half marathon event, our first casualty from the wolf pack - Bananamatt picked up a “serious knee injury” and was unable to take any further part in the proceedings, period. Real lame. 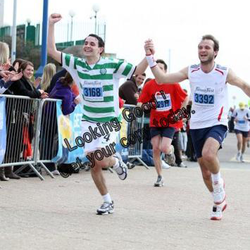 Bournemouth! March! Bananamatt is replaced aptly by the great Daniel Speirits, a nicer guy you will not find! Now back to a wolf-pack of 3, it lasted all of 2 minutes when Dan sprinted off into the distance at the very start. Super. Me and Dean-O stuck together, gradually picking up the pace as the crowd spread out. We stuck together for the first 3 miles, winding away from the seafront, through the gardens and then back down onto the promenade. At this point I got my first “second-wind” from somewhere, and just opened up my legs, racing down the seafront at a good pace. It took me 3 flat miles before I caught up with Dan, spotted him a mile off in his Celtic shirt! Once I caught him we remained together for the rest of the race, encouraging each other. Having never run 13.1 miles before, I was astounded by my time. We crossed the line hand in hand after 1:39:33!

It took me 3 days to recover fully, I felt so ill after the race, I put in such a big effort. I guess the 3 strawberry dacquiris at the finish didn’t do too much to aid that.

I guess it was always on the cards. DeanO was never shy about his dislike of the sport. So his abandonment, coupled with Dan heading off to USA and Bananamatts’ insistence on having an injury, brought my wolf-pack finally down to one. Good riddance to bad rubbish I say (not you Dan).

So after a weeks rest it was time to ramp up the training. I began overload training - running a fast 3-4 miles with a weighted backpack on - coupled with extended runs on the weekends. Luckily, my Grandparents live in Rubery, which was just the right distance for me to plan several routes of increasing distance, allowing me to have somewhere to collaspe at the end! I included the infamous Rose Hill in my route on several occassions, and actually managed to beat it a total of 3 times! As the distances increased though my commitment began to tail off, I was eager to get the final run out of the way. I only managed a run of 17 miles before the event itself, nearly 10 miles short of the distance!

This came in a very weird way for me. In the 3 weeks leading up to the marathon, I found myself unable to complete runs any longer than 30 or 40 minutes. No matter what the pace, I began suffering from the same problem I had at the beginning of training, which I can only put down to nerve problems in my leg caused by the knee operation I had on it. This was my main worry going into race day itself, if this happened again, I would have to walk the circuit, which would take until nightfall!

Warming up at the starting place, I wandered over to a bench by the seafront to do my stretches alone, and would you believe it, bumped into an old pal from Redditch! At least I now had somebody to watch the England vs. Germany game with, if I finished in time! At the peak of my training, I was seriously looking at finishing in a time of 3:30:00, which would have ruined me but I felt very capable of achieveing it. After hitting the wall however, I reset the bar to a more sensible but respectable 4 hours. If only I knew what was in store! As it turns out, this was a cross-country marathon. Now, I didnt realise this; having run the half marathon along the seafront in Bournemouth, I simply assumed (despite knowing the area) that it would be a fairly flat race. Because the sea is flat, right? Yeah, the sea is flat. But cliffs are not. I cannot describe the terrain, you simply would not believe me. I think this accurate elevation map, comparing the changes in height of the London Marathon (red line), with the changes in height of the North Devon Marathon (green line), says it all really.

I completed the first half in just over 2 hours, which was outstanding, but far too fast for me. The route took us right to the top of the cliffs along the edge of Woolacombe, and across to Croyde bay, with a run along Croyde beach itself, then up again into the hills and back down to Woolacombe. I crossed the start finish line to begin the second half, and was in bits. Absolutely demoralised, it was such a help to see 2 friendly faces; my Redditch pals were there with a bit of banter, which was the only thing that kept me going at this point.

I decided to take half an hour to walk. The terrain became completely impossible during the second half, literally running along a narrow trail on cliff edges, shards or rock making the path, and stepped hill after stepped hill. I found a runner for 3 or 4 miles that took my mind off things, a really old guy, couldn’t understand a word he was saying. Think Father Jack Hackett crossed with Rowley Birkin and you’re almost there. My impatience got the better of me again though and I had to head off, into some of the most amazing scenery you never see. It was just stunning, running along a coastal path, dodging sheep, running over streams and ancient bridges that I would never see otherwise. It really justified to me why I was doing it. Come the 18 mile mark, I had a new, unwelcome problem. Reaching the top of one of the last hills before heading inland, I looked down to place my foot, and noticed my calf muscle trying to jump out of my skin. Whilst extremely fascinating, and something I had never seen before (except in the movies), this destroyed the final 8 miles of my race.

I was restricted to the following pattern: 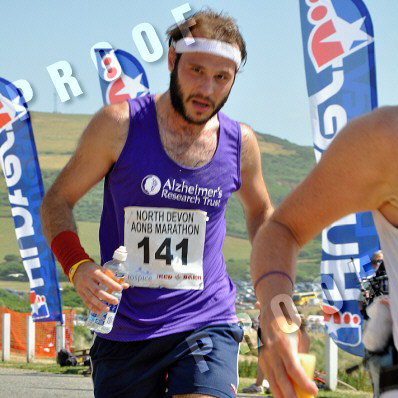 This became unbelieveably frustrating, to the point where I had fully recovered my heart rate and energy, but I simply could not run for extended distances. I even stopped sweating! I began exchanging places every couple of minutes with a lady named Suzanne White, who finished just a few metres in front of me at the finish. She was a member of the North Devon Runners’ Association and had trained this exact route on a few occassions, so I thought, if I can stick with her, I will have done ok. This became my target and really helped me through the final third. I finished in a time of 5:05:13, in 85th place, and I am so so proud of that achievement.

I can’t believe I have achieved this goal, it’s a period I won’t ever forget, especially the day itself. I actually found myself enjoying the race, despite my constant proclamations of “give me a ball and i’ll chase it for days on end; take the ball away, and I cannot stand it”. Before I started, my target had always been to run a 4 hour marathon. I think what I achieved is something far greater. I am considering entering a city marathon in the near future, while I have all this training behind me, just to achieve a time. But it won’t be as beautiful, or anywhere near as fun, so I guess I will have to think about it for a while. I raised nearly £500 for The Alzheimers’ Research Trust to boot, which is always a good thing.

1.Born to Run: The Hidden Tribe, the Ultra-Runners, and the Greatest Race the World Has Never Seen - Christopher McDougall